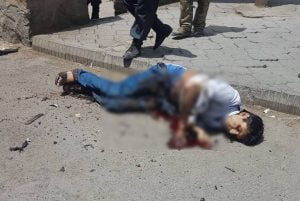 The Kabul Security Commandment officials are saying only the suicide sustained critical wounds in today’s incident in capital Kabul.

Hashmat Stanikzai, a spokesman for the Kabul Security Commandment, said the suicide bomber was identified and shot by the security forces before he manage to reach to his target.

Stanikzai further added that the bomber was looking to target a gathering of protesters in Shahr Naw Park.

No individual or group has so far claimed responsibility behind the incident.

The officials had earlier said the suicide bomber has been shot dead by the security forces.

Dozens of supporters of Gen. Abdul Rashid Dostum had participated in a demonstration in Kabul city today, demanding the return of the Vice President from Turkey.

Enayatullah Babur Farahman, a member of the party and chief of staff of the First Vice President’s Office, said the move by the ‘conspiracist circle’ will further strengthen the resolve of the people for justice.