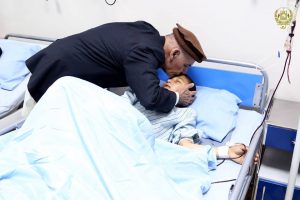 The Office of the President, ARG Palace, said President Ghani met with a number of the wounded individuals who were shifted to Shahid Daud Khan hospital in Kabul.

The provincial officials in Kunduz had earlier confirmed that both the Taliban and civilians suffered casualties in the airstrike last week.

The Ministry of Defense officials are saying that the airstrike was carried out a main stronghold of the Taliban group in Dasht-e-Archi district which was also being used as the training camp by the group.

According to the defense officials, the raid was conducted based on accurate intelligence information and as a result several Taliban insurgents including eighteen of their leaders were killed.

In regards to the civilian casualties, the Ministry of Defense spokesman Gen. Radmanish said the Afghan army helicopters attacked the the compound with rockets but the civilians sustained casualties from small fire arms.

According to Gen. Radmanish, the Taliban militants initially opened fire on army helicopters after their base was attacked with rockets and later opened fire on civilians.

However, President Ghani said a thorough and precise investigation is underway regarding the incident and civilian casualties is underway by the delegation appointed by the government.