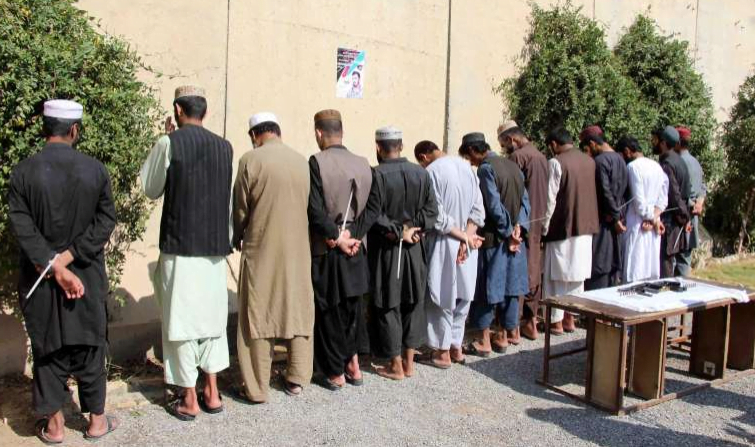 Document details 14 deadly raids by pro-government units with support of US intelligence.

The Afghan soldiers who swept through Kulalgo village one late August night shot three of Dr Ulfatullah’s relatives carefully, a single bullet through their left eye, faces otherwise untouched as blood pooled below their bodies on the floor of the family home.

The last killing was less precise, and left the face of university student Ansarullah badly disfigured. His family thought perhaps he had heard the muffled gunshot that ended a cousin’s life, and briefly tried to struggle against his captors.

The men who killed them were from a pro-government force backed by the CIA and largely unaccountable to Afghan authorities, the family say, one of several which operate across east and south Afghanistan in traditional Taliban strongholds.

In the last two years, as the battle for Afghanistan has intensified and a regional Isis affiliate has joined the civil war, there has been a sharp rise in abusive night-time raids by these forces, according to a report by Human Rights Watch.

The report, titled They have shot many like this, details 14 deadly raids, where victims have included an elderly woman, a child, and a 60-year-old tribal elder, and says that abusive visits by these units have become a daily fact of life for many communities.

“I believe the 14 [raids we investigated] are only a fraction of the cases of this kind … but because they occur in remote areas most go unreported,” said Patricia Gossman, associate Asia director for HRW and author of the report.

“In ramping up operations against the Taliban, the CIA has enabled abusive Afghan forces to commit atrocities including extrajudicial executions and disappearances. In case after case, these forces have simply shot people in their custody.”

According to witnesses, on 11 August this year troops from one of these CIA-backed units – which, the witnesses said, was accompanied by at least one US soldier and a translator – served as judge, jury and executioner for 11 men in Kulgago village.

Four were executed in the family compound of Dr Ulfatullah, a pharmacist who lost two sons and two cousins, and has moved his family to Kabul to campaign for justice. “The blood of our sons is still in the rooms where they were killed so it’s difficult for us to live there,” he told the Guardian in the Afghan capital.

Although the family campaign has led to meetings with senior Afghan officials, including the defence minister, head of the National Directorate of Security (NDS) intelligence service, and the provincial governor, they say they do not feel any closer to either understanding why their children were killed or seeing justice.

“The government should tell us why they were killed. Until we get an answer we will keep asking,” he said. HRW said it did not know of any case where someone had been held accountable for abuse by CIA-backed troops.

The report identifies five different forces which nominally come under the control of Afghanistan’s intelligence service, the NDS. Unofficially though, they are a law unto themselves.

A security source said operational sign-offs required by the NDS are treated as a nominal courtesy, and sometimes done after the fact. The governor of Paktia province also told Ulfatullah’s family that he had no authority over the forces.

The Nato combat operation in Afghanistan officially ended in 2014, and now only supports Afghan security forces. But the US has a separate counter-terrorism mission in Afghanistan, which has continued fighting aggressively, and includes the covert CIA-backed forces.

There has been growing concern about the civilian toll from operations under this mission, particularly air strikes, with casualties rising steadily from these since 2014, according to UN figures.

But deaths and injuries caused by search operations have been rising too, with more than half caused by NDS special forces – the units with CIA links – according to the UN. These incidents also show more victims killed than injured, a disturbing reversal of common civilian casualty patterns in the conflict.

“The high number of fatalities compared to the number of injured suggests that force was employed indiscriminately,” the UN said.

In Kulalgo, survivors say the killings have emptied the village. Drones and planes still patrol the skies, so those who do stay are frightened to sleep in their own homes.

“The schools are shut down, the agricultural work is not being done. The youth are not staying in their homes at night because of fear of night raids,” said Ulfatullah’s only surviving son, Hekmatullah. “There is no life in the village at the moment because people are scared they will come back and kill more innocent people.”

The young men in Kulalgo were targeted as insurgents, but Shafiullah and Hayatullah, both 26, worked for the same government as the men who killed them, as a teacher and an education ministry official respectively.

Emanullah, 19, helped in the family pharmacy and his cousin Ansarullah, also 19, was in the second year of a chemistry degree. And the choice of targets seemed casual; Hekmatullah was taken off with the men who were killed, but released just minutes before the shooting after he told the soldiers he worked for the UN.

The family insist that if they are given any evidence of Taliban links they will drop their campaign immediately, but they are sure they were not legitimate targets. “If they can prove that our kids were wrong, we will forgive everything, but if it can’t we want (the people who did this) brought to justice,” said Ulfatullah.

Mistaken identity, poor intelligence and local political rivalries all led to civilians being targeted in raids investigated by HRW, the group said. Some families were also attacked after providing food to insurgents, even if they acted under duress.

The CIA said it had not had time to investigate the Kulalgo raid, or any of the other raids detailed in the HRW report, in a response to the rights group.

It said reports of abuse were “likely false or exaggerated”, and attacked the Taliban for spreading false propaganda. “We neither condone nor would knowingly participate in illegal activities,” the statement said.

The accounts given to the Guardian came from relatives and survivors, not insurgents. “CIA conducts its global operations in accordance with law and under a robust system of oversight,” Timothy Barrett, the CIA press secretary, told the Guardian.

Another villager said the raids would only push people into the arms of insurgents, an argument made consistently by human rights groups over two decades and at one point when Hamid Karzai was president, by the Afghan government.

“We invested in these guys to work against radicalisation, and they are the ones who got killed,” asked one local who supported the young men’s education. “They are part of our planning for how we should brighten our future, get rid of the influence of Taliban. What will be the impact of their deaths?”