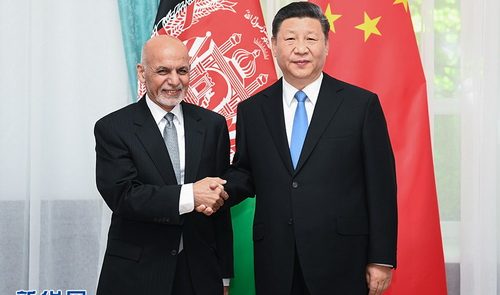 Xi Jinping congratulated Afghanistan on the 100th anniversary of its independence and wished Afghanistan an early restoration of peace, stability and development. Xi Jinping pointed out that China and Afghanistan are neighboring countries that enjoy traditional friendship and strategic cooperative partners.

The Chinese side is willing to, together with the Afghan side, constantly deepen the mutually beneficial cooperation in various sectors within the framework of the Belt and Road Initiative, steadily advance practical cooperation projects in economy and trade, and support the two countries’ enterprises in strengthening cooperation based on the principles of mutual benefit and win-win results.

The Chinese side will, as always, continue to help Afghanistan build its capacity in fighting terrorism and maintaining stability, and hopes that the Afghan side will continue to firmly support the Chinese side in its fight against the terrorist force of East Turkistan Islamic Movement (ETIM).

Xi Jinping stressed that the Chinese side firmly supports a comprehensive and inclusive Afghan-led and Afghan-owned peace and reconciliation process, and will continue to actively encourage and promote peace talks through various channels to help the Afghan people achieve internal dialogue.

The Chinese side supports Afghanistan and Pakistan in improving their relations, enhancing mutual trust and carrying out cooperation, and stands ready to further promote the China-Afghanistan-Pakistan trilateral cooperation.

Mohammad Ashraf Ghani conveyed congratulations on the 70th anniversary of the founding of the People’s Republic of China.

By proposing building a community with a shared future for mankind and supporting the economic globalization, China has set an example of promoting the development of a new type of international relations in the 21st century.

The Afghan side thanks the Chinese side for the active role it has played in Afghanistan’s peace and reconciliation process and in safeguarding regional peace and stability. Afghanistan is committed to fighting, side by side with China, against the “three forces” of terrorism, separatism and extremism including the ETIM.

Afghanistan stands ready to align its plan of reconstruction and development with the Belt and Road Initiative and set up an even closer trade and economic partnership with China.

Ding Xuexiang, Yang Jiechi, Wang Yi, He Lifeng and others attended the meeting.